This is a guide on how I built my first hackintosh.

I also did not want to spend too much time troubleshooting things. Looking through the OSX86 community and the various guides out there, it looked like OSX86 had matured to a point where it was really simple to get a machine up and running nearly 100% assuming you purchased compatible hardware (more on this below in the The Build section).

These are the parts I have, although at different prices.

This is the first PC I have ever actually built, so I’ll add some of my thoughts how I chose my some of my parts in case you are in the same boat.

In choosing my parts, I mostly stuck to the CustoMac buyer’s guide for August 2013 for mobo/CPU/GPU; the other parts (like RAM/PSU/case) don’t matter as much for Hackintosh compatibility. I did this because I wanted minimal setup and maintenance as I did not want to spend a lot of debugging kernel panics and troubleshooting drivers :). The GA-Z77-DS3H motherboard does not require a DSDT, which eliminates some unnecessary complexity.

I chose Ivy Bridge because Haswell support hadn’t really been fully vetted by the TonyOSX/OSX86 community yet. I went with the 3570K because I didn’t really know any better. In hindsight, I would have probably opted for the 3570 instead for the VT-d CPU extensions, as I plan on running VMs more than I plan to overclock.

My PSU is overkill on this build, but I found a good deal on it ($96 AR for modular, Gold-rated Seasonic).

For the case, I knew I wanted something quiet. Researching online showed that a lot of folks liked Nanoxia Deep Silence 1 and the Fractal Define R4. At such similar pricepoints, the general consensus was that the German-built Nanoxia was the superior case. However, NewEgg was out of stock, and the only places I found that had them were in Europe (killer shipping). I found the Define R4 on sale and in stock, so I went with that. I really like it.

In the end, the build turned out really nice. It’s super fast, quiet, and runs cool.

While you’re waiting for your parts to arrive, you can at least start preparing the Unibeast installer. I followed this guide to prepare my Unibeast flash drive. This was pretty straightforward.

Make sure to keep the flash drive even after install as it can be useful for recoveries/troubleshooting when things go wrong (i.e. after an accidental OSX update).

I followed the following guide to configure my BIOS.

I would recommend using the Profiles feature (if possible, save to SSD/HDD, rather than CMOS) in the BIOS to save your configuration as soon as you have a bootable working configuration so you have something to go back to if you want to tinker with more settings after the base config.

For sleep/wake to work properly, I mucked around with my BIOS settings until I had the following:

Here are all the screenshots of everything I changed in the BIOS. You can change the Turbo Ratios if you want to overclock. The memory profile can be changed to XMP if your RAM supports it (mine did). More about this in the Overclocking and X.M.P. (optional) section below.

You will be booting from the UniBeast USB flash drive you made earlier to install OSX on your harddrive.

I followed this guide to install Unibeast.

I was able to run through the installer with my monitor plugged directly into the GTX 660. Again, pretty straightforward.

Once you have OSX installed on the harddrive, you will need to run MultiBeast in order to install the bootloader and other necessary drivers for your rig. I followed this guide to run through MultiBeast. I used Loginfailed’s golden build as a guideline for the most part. Exceptions in the Gotcha section below. I ran MultiBeast 5.4.3. In the end, here are my MultiBeast settings: 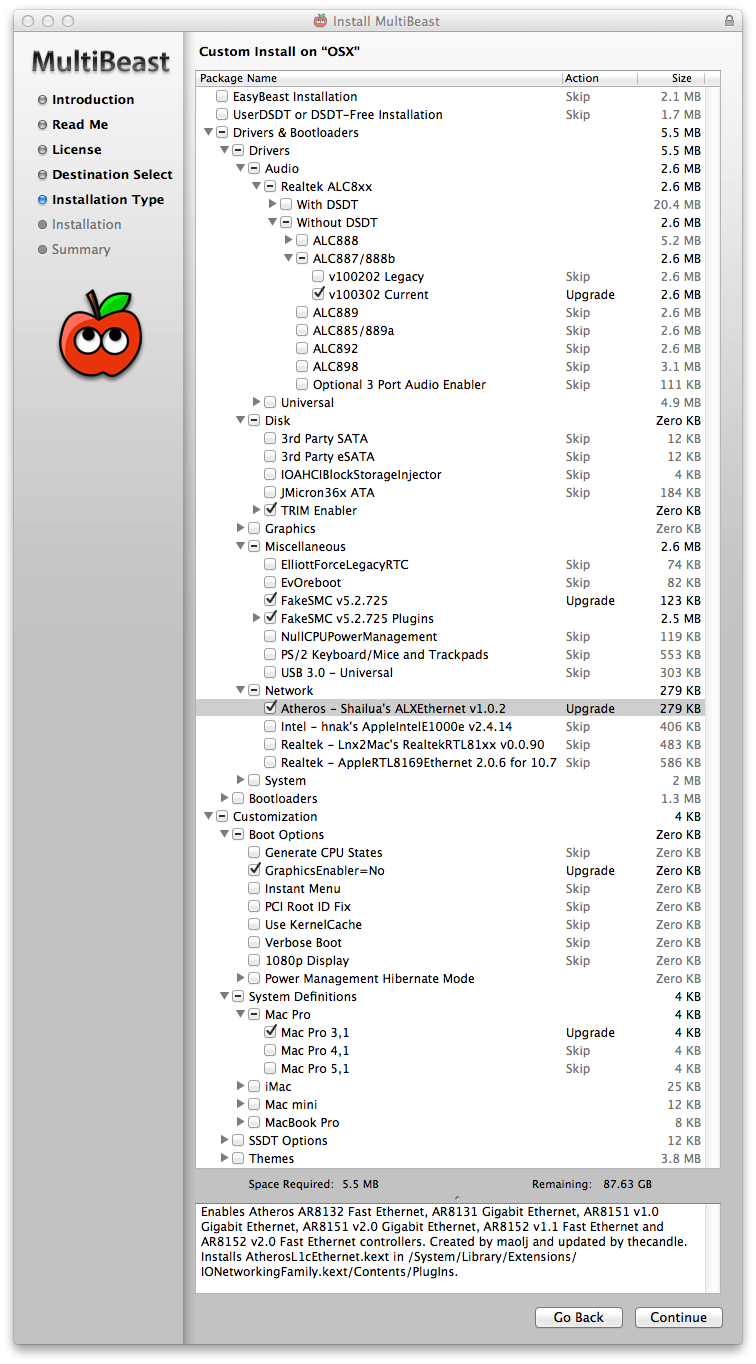 This is the only part that took the most troubleshooting/research, so I hope this saves you some time and hassle.

It appears that the onboard NIC this motherboard, the Z77-DS3H revision 1.0 runs the AR8151 chipset, whereas the newer revision 1.1 runs the AR8161 chipset. For a while, folks running revision 1.1 could not get onboard ethernet to work. This was until Shailua created a driver for the newer chipset.

This meant I could not follow Loginfailed’s golden build exactly because Maolj's AtherosL1cEthernet kext will only work for the older chipset (AR8151).

The kext that does work for revision 1.1 is kind of an experimental driver and folks have reported issues (kernel panics) when performing large network file transfers. The developer, Shailua, seems to have gone MIA.

Here is where your path may differ from mine depending on your mobo revision and use case.

Use the onboard NIC – Shailua’s kext

I went with the onboard NIC for now. If I see any stability issues, I’ll probably get one of the PCIe Marvell 88E8053 chipset adapters.

If you want to overclock the 3570K CPU, you can adjust the Turbo Ratio values in the BIOS (note that there is no v_core configuration available on the Z77-DS3H motherboard). If your memory supports X.M.P, you can enable that as well in the BIOS.

What if something goes wrong

Boot into safe mode by entering the following in the bootloader with the -x boot flag. You can add the -v flag to get more information if you are getting kernel panics.

All in all, this was a fun project and I got exactly what I wanted out of it: a relatively affordable, low-maintenance, powerful, and quiet Mac. Just don’t install any OSX updates until they are vetted by the OSX86 community!

I have updated to 10.9 and had random freezes (nothing peculiar in system.log) until I turned off memory overclocking (X.M.P)…

Want to support us?